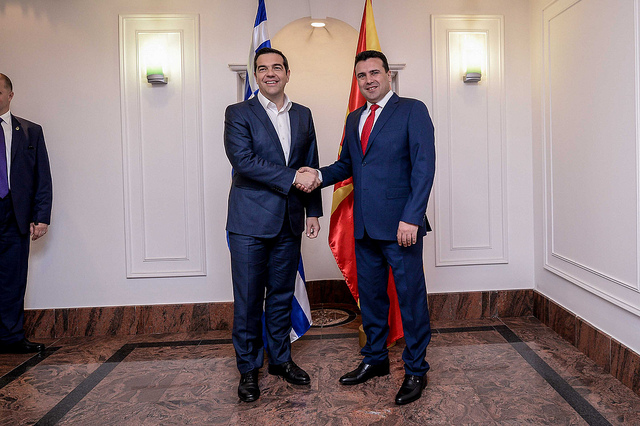 My visit here is the first, official visit by a Greek prime minister to your country. We wasted so much time. We have to run faster, because we’d wasted three decades. We have to bridge all of these gaps and transition from history of wars and a narrative of division. We must try to set up a new narrative of joint cooperation and growth, Greek Prime Minister Alexis Tsipras said Tuesday speaking at a joint press conference with his host and counterpart Zoran Zaev.

Greece, Tsipras said, will keep on supporting North Macedonia in its efforts to pursue the much-needed reforms and to become part of the EU.

“Our official visit today is a historic step ahead in the Balkans and Europe. We came here to find a solution and look ahead, to build bridges instead of erecting walls,” noted Tsipras.

In terms of diplomatic relations, he said that embassies had been established, which would replace the existing contact points.

“Several months ago, Greece was the first country that had ratified the accession protocol of your country to join NATO. Today, we signed a memorandum of understanding and advancement of North Macedonia’s EU pre-accession and accession processes,” the Greek PM told the press conference as part of his first official visit to Skopje.

Economy, he said, was the focal point of today’s meeting. “We have to press on to bridge the gaps of the past and to avoid double taxation.”

“Despite the difficulties, a lot of Greek businessmen at the moment are operating in North Macedonia. However, my delegation includes more than 100 entrepreneurs in order to establish better cooperation and relations in the future. We’ve also established a coordination cooperation committee, which is tasked with overseeing and supporting such efforts to strengthen business ties,” PM Tsipras stated.

“The cooperation is considered important because it covers several sectors, including training, the defense industry, cyber defense, military intelligence, as well as an air force policy,” stated Tsipras.

Greece will conduct air control from Thessaloniki in order to guarantee security of Macedonia’s air space.

To make sure there are solid foundations for cooperation that will stand the test of time, according to the Greek PM, the two countries have to work hard to ensure the Prespa Agreement is properly implemented.

“In only a short period of time, we have made huge steps and we should keep doing so in the future,” noted Tsipras.

Speaking at the news conference, PM Zaev said that the historic visit was, in fact, a strong expression of a joint political will and a strong sign for the settlement of open issues, considered a contribution to a new Balkans.

“Since 17 June 2018, the day when our countries signed the Prespa Agreement, we’ve made history on several occasions. Greece is the first country that ratified the NATO Accession Protocol all the while PM Tsipras has called on the EU to open negotiations for membership of our country. It’s a victory of the policy of progress, of peace and friendship between the nations,” PM Zaev stressed.

The political will, friendship and trust established recently, he said, have resulted in today’s session of the high-level cooperation council between the two countries, where they signed the action plan on strengthening comprehensive cooperation in line with the Prespa Agreement.

“While looking back, you see missed opportunities. When looking ahead, you see open opportunities and joint interests. The two neighbors had made brave decisions for unity. What seemed like impossibility, today has become a reality,” stressed Zaev.

He added that a joint expert group on commercial use of the name, terminology and brands would be set up by mid-May. He hailed the memorandums signed in the sphere of transport, and energy talks, as being of great importance.

“Alexis has become my good friend in these past months, and he is also a friend of our country. I suggest we build friendship with our neighbor Greece and with all of our neighbors,” said PM Zaev.

Later in the day, Zaev and Tsipras will open a business forum, which brings together over 400 businessmen from the two countries.