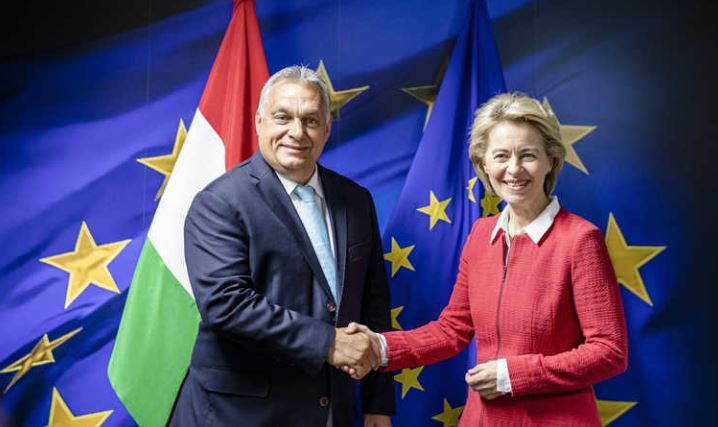 It was a good call to keep the “ideological guerrillas away” and elect leaders with pragmatic instincts, Hungarian Prime Minister Viktor Orban told Hungary’s state broadcaster after meeting Ursula von der Leyen in Brussels on Thursday. On the new EC president, Orban said “we made a good choice, so far”. The identity of Hungary’s EU commissioner candidate was alluded to during the talks. The ruling coalition Fidesz-Christian Democrats’ party list was led by Laszlo Trocsanyi as people were told that he would become commissioner, if they vote for the party list, Orban added.

Hungary’s premier described Von der Leyen as a politician “whose thoughts on the future involve the same questions that are also important to us.” These are the future of children and families, as well as security, Orban said, calling the development of a joint European army and military industry another common intention. Ursula von der Leyen has a sensitive approach to delicate issues such as migration, and is also able to think like Central-Europeans in this regard, Orban added. “We’ll see what happens, but we stand a better chance of finding reasonable solutions than ever before, or with any other candidate,” he said.

Orban said the summit was successful, adding that the new EC president passionately believes in the future of the EU, and “instinctively” denies any issue that would divide member states. Orban called it a Hungarian interest, as “we also want to unite all EU countries in way that every country can stay as it was; so that Hungary can remain Hungarian”, the V4 news agency reported.

The Hungarian premier expects a pragmatic approach on difficult issues, such as climate change, energy, economics or migration. On the latter, he said he expects more meaningful debates in future, as the new president understands the difference between the Western and Central European mentalities. While Western Europeans deal with the integration of migrants, Hungarians and Central Europe agree that they do not want to establish multicultural societies, he added.

Von der Leyen said discussions should focus on matters that can reach a positive outcome, such as the importance of border protection. Migrant procedures should be conducted when the asylum applicant is still outside the EU, the Hungarian premier said. The participants of the summit also agreed that free movement should not be granted to migrants on the continent during the application period, but a humane solution should be found, which guarantees the security of citizens. Everyone agreed that all migrants entering the EU illegally should be sent home.

Hungary will generate 90% of its energy from carbon-neutral sources by 2030, in line with its commitment, Orban said. However, the country is under “pressure” to promise to achieve net zero carbon emissions by 2050, Orban added. “We have to work on the issue, and it requires new, expensive technologies that should be at least partially financed by the EU,” Orban underlined.