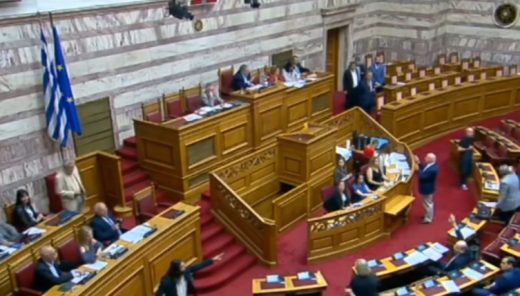 The divorce on Sunday between ruling SYRIZA and junior coalition partner Independent Greeks (ANEL) over the latter’s opposition to the Prespa agreement with Macedonia amounted to nothing more than a trade-off which will work in the government’s favor in Wednesday’s confidence vote, according to opposition parties, Kathimerini reports.

“The SYRIZA-ANEL alliance still exists. [The two parties] have just merged. However, their mentality which led the country to an unprecedented downfall will affect us for a long time to come,” New Democracy leader Kyriakos Mitsotakis said Monday in an interview with Antenna TV.

“[Prime Minister Alexis] Tsipras and [ANEL leader Panos] Kammenos are in perfect agreement so that they each get their way,” he added.

Analysts say the alleged trade-off to break up the coalition will work in favor of both parties.

ANEL MPs Costas Zouraris and Thanassis Papachristopoulos and Deputy Citizens’ Protection Minister Katerina Papacosta have also said they will back the government.

SYRIZA itself has 145 MPs and with the addition of the ANEL MPs and Papacosta, its tally will reach 150 in the 300-seat Parliament and will need one more vote to win – with the possibility that To Potami MP Spyros Danellis will break with his party and vote yes.

Kammenos adopted a different stance regarding Zouraris and Papachristopoulos as they are not ministers and, accordingly, could not have struck a deal to remain in the cabinet – as Kountoura and Kokkalis allegedly did – and therefore have not been ejected from the ANEL parliamentary group.

This will allow ANEL to keep its threshold number of five lawmakers in the parliamentary group. Anything below five would lead to the group’s dissolution.

Kammenos said he would back a censure motion by New Democracy on the condition that Mitsotakis publicly commits to reject a deal that would include the term “Macedonia.” “We insist on no use at all of the term ‘Macedonia,’” Kammenos told Star TV in an interview.

“I will do anything permitted by the constitution to prevent the deal from going through,” he added.

Pendarovski in Athens: Historic visit of a Macedonian President to Greece