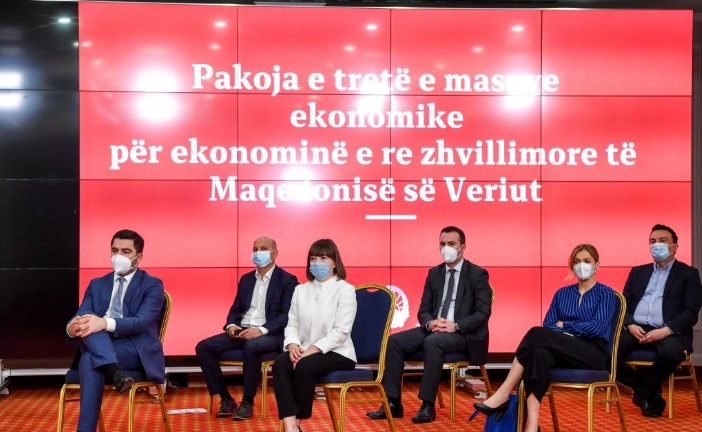 The latest set of economic measures from the Government, which it plans to adopt by decree, is seen in the public as an open attempt to bribe voters ahead of the elections that should take place by the end of the year. The measures would provide 355 million EUR in funds that would be distributed directly to citizens, in small grants in cards or vouchers of up to 100 EUR, depending on their income.

The cards and the vouchers would be given to purchase any kind of goods produced in Macedonia, or to be used for vacation within the country. Vouchers will be given for young people who want to attend IT training, and additionally to women and the young to introduce IT technologies to their businesses. The type of the assistance, and especially the mode of delivery – with cards and vouchers issued by the Government, leaves the impression that its main purpose is to placate voters ahead of the elections and to be used as bolster the popularity of the ruling SDSM party.

The target of this pre-elections bribery will be 100.000 voters, or 25-30.000 households, who, SDSM hopes, will they pay the party back by voting for it in the elections. Will the European Union, the United States and NATO stand by as this blatant election bribery takes place? Will the voters sell their convictions for 100 EUR? And who will pay for this, given that the budget is deeply in the red, and the Government has been unable to tap much funding in the international markets?, the Vecer daily asks.

Given that the SDSM led Government is pushing for an election date in June or early July, the move would also violate the electoral code. It bans public sector hiring and new spending after the elections have been declared.
In response, Deputy Prime Minister Mila Carovska insisted that the plan is meant to bolster spending and stimulate the economy.

If we hadn’t offered money to the citizens, we would’ve been asked why aren’t we doing it, Carovska said. She insisted that previous steps, to provide subsidies to businesses, are working “excellent”, with 16.546 companies applying for assistance.