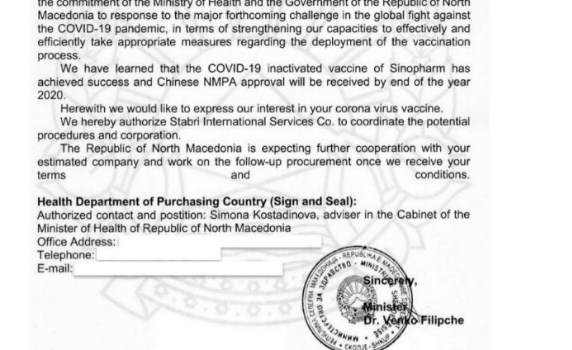 Healthcare Minister Venko Filipce denied trying to take a cut from the large vaccine procurement contract with the Chinese Sinopharm company. The deal worth 12 million EUR for 200,000 doses of vaccines collapsed after Filipce tried to use a shell company registered in American Samoa and Hong Kong to conduct the deal. Sinopharm withdrew from the contract, paid back the advance given by the Healthcare Ministry and the delivery of their vaccines was significantly delayed, at a time when they were badly needed in Macedonia.

There was no attempt to take a cut from the sale, or for anything else that is illegal. There was no payment of 12 million EUR on our part, Filipce said in a written response to a VMRO-DPMNE member of Parliament.

In the letter, Filipce confirmed that he tried using a private company after the Ministry failed to get in touch with the manufacturers, but that there was no attempt to extort kickbacks. “The process was transparent, and is being examined by the Anti-Corruption Commission”, Filipce insists.