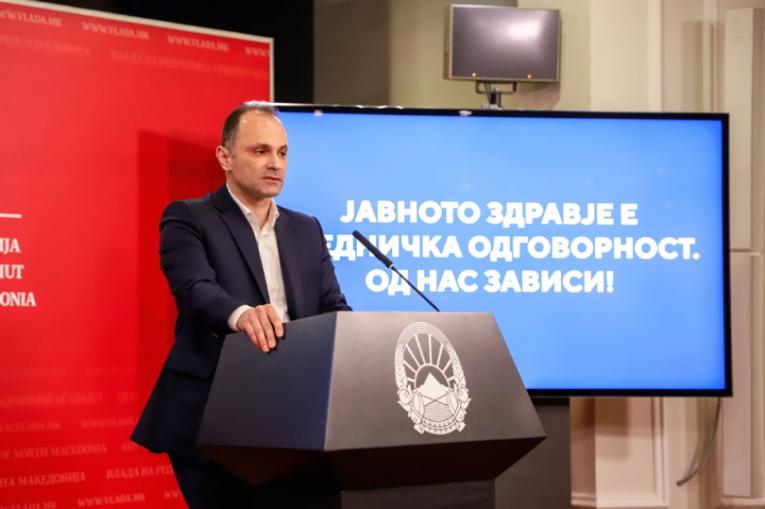 Healthcare Minister Venko Filipce was the public face of the coronavirus effort over the past months.

Despite a long track record of corruption and some inexplicable gaffes, which led to his removal by the SDSM party from the lists of candidates for the coming general elections, Filipce managed to build an image of a cool and competent administrator. As in other countries affected by the virus, the public rallied behind the healthcare workers, and the Government PR machine was put in place to promote what it called the major success in handling the virus while the numbers were still low.

In daily press conferences, Filipce gave the numbers of newly infected patients and the occasional death, always putting the focus on the number of “cured” patients. Journalists quickly gave up on asking critical questions after the Government supporting commentators in the social media quickly turned on anybody who would question Filipce’s handling of the epidemic, his past (and allegedly on-going) corruption. Even an innocent question over whether the Ministry advises that home refurbishing projects are put on hold was enough to hound the journalist who was “wasting Filipce’s time”. The peak of the cult of personality building was reached when Viber stickers with Filipce’s face and the message “Listen to Venko” were promoted, and a Facebook commentator got famous for her incessant pleas to Filipce to take her out for a coffee.

But then statistics got steadily worse, and Macedonia reached a high point of over 100 newly infected patients in one day. The deaths ranged between 1 and 4 daily, and have gone over 120 in total. The Government badly mishandled the breakout in Kumanovo, partly due to political infighting within the SDSM party, and eventually the key Government Ministers, including Filipce, had to go into isolation because of a badly organized visit to Kumanovo.

This was enough to show that Macedonia is among the worst performers in the region when faced with the virus. Under Filipce, Macedonia was able to conduct only a middling number of tests – 12.400 per million inhabitants, and yet has the highest number of confirmed cases (967 per million) in the whole region, behind only Serbia which performed twice the number of tests. The death rate in Macedonia is by far the worst in the region. But the Government has apparently estimated that the bump in popularity and the rallying around the healthcare workers is enough to paper over the long track record of corruption and national humiliation and is now pushing for elections to take place as soon as possible – as early as June, even as most of the citizens insist that they will not go to the polls.

Filipce puts PR considerations above the pandemic. And for Zaev – the elections come before public healthcare. Macedonia is the only country in the region where the Covid-19 risk is increasing, said VMRO-DPMNE official Antonio Milososki.

Filipce responded with an attempt to present misleading statistics. He tweeted out a claim that the Macedonia is en par with countries like the US and Germany, and far better than countries like Belgium, France or Italy with a death rate presented as the percentage of diagnosed patients – not the overall population.

Even the number of deaths per million is likely more favorable for Filipce’s record, given that Macedonia has notoriously unreliable resident statistics and the actual number of people living in Macedonia is probably far lower than the official two million. But presenting the deaths as a percentage of the confirmed Covid-19 cases, with such a low number of tests being conducted, was seen as an outrageous manipulation. But, it is also likely an indication that Filipce has decided to fully politicize his position and to be the leading person in the coming SDSM pre-election campaign.