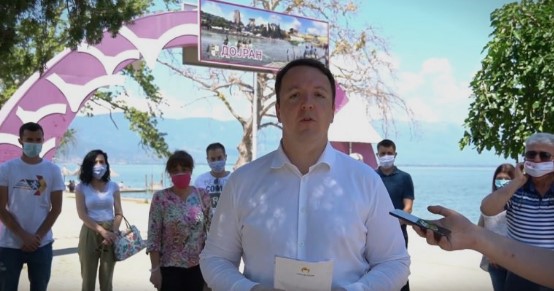 Here, in Dojran, I challenge Zoran Zaev to a TV duel to debate our party programs for our citizens to make a difference and to give their support to the VMRO-DPMNE-led coalition for ‘Renewal of Macedonia’, VMRO-DPMNE Vice President Aleksandar Nikoloski said Monday in Dojran.

Nikoloski, who is the first candidate on VMRO-DPMNE’s list in the fourth electoral district, tours several southeastern town and settlements as part of his campaign activities.

According to him, tourism despite having huge potential in the region has been recently underdeveloped.

A lot needs to be done, first and foremost tourism workers should be subsidized in order to be able to offer better services to attract as many tourists as possible, Nikoloski said.

We, he noted, should establish a brand Macedonia to attract tourists.

Tourism as a sector should be removed from the Economy Ministry and included into the Culture Ministry. A new ministry should be formed – a Ministry of Culture and Tourism, following the example of the countries having top tourist destinations. This is going to be our election promise, Nikoloski stated.