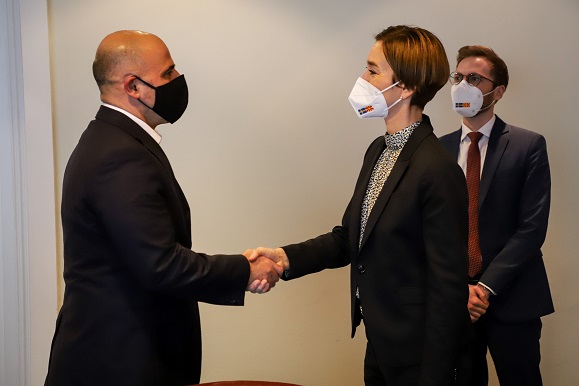 Ambassador Kristin Forsgren Bengtsson handed over the personal letter of the Prime Minister of Sweden Magdalena Andersson to Prime Minister Kovacevski, in which she congratulated his election as Prime Minister of Macedonia and wished him and the members of his cabinet success in the realization of the planned programs priorities.

At the meeting, Prime Minister Kovacevski thanked for the support of the Kingdom of Sweden throughout all years of Macedonia’s independence, since the establishment of diplomatic relations in 1993.

At the meeting, Kovacevski briefed on the priority issues of the Government of Macedonia, including the policies for dealing with the energy and health crisis and measures to eliminate the consequences for the economy, which focus on supporting investments in the real sector to save jobs and implementation of reforms.

Regarding Macedonia’s EU integration process, Prime Minister Kovacevski stressed the progress of relations with Bulgaria, which have been restored to the highest political level, and added that the established dialogue and action plan of working groups in several areas promises a good basis for political solutions of open questions acceptable to both parties.

The Swedish Ambassador stressed that her country remains a strong supporter of Macedonia and that it will continue to affirm the view that EU membership negotiations should begin without further delay in accordance with the European Council decision of March 2020.

She added that Sweden, as the largest bilateral donor from the EU countries in the country, will continue to support Macedonia in several areas and that in the coming period more planned initiatives for greater trade will be activated and for additional incentive for Swedish companies to invest in the country.