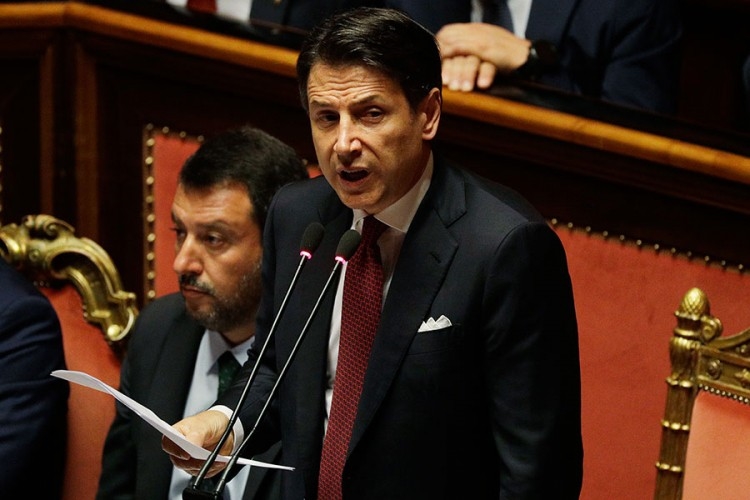 The Italian prime minister, Giuseppe Conte, has said now is the time to “turn a crisis into an opportunity” after accepting a fresh mandate to try to form a new government that could mark a turning point in Itay’s fractured relations with the EU, Guardian reported.

President Sergio Mattarella has tasked Conte with securing a pact between the anti-establishment Five Star Movement (M5S) and the centre-left Democratic party (PD) in a move that would oust the far-right League from government and stave off early elections.

“It’s a delicate period for the country and we need to exit the political uncertainty soon,” Conte said after a meeting with Mattarella on Thursday. “This will be a new season, a time for relaunch … it won’t be a government ‘against’, but one that is for the citizens and modernises the country.”

He also said Italy, one of the founders of the EU, must return to being a “protagonist” in the bloc.

This could be Conte’s second chance at leading Italy after he resigned last week, ending a turbulent alliance between M5S and the League. Conte, a law professor, has a few days to ensure M5S and the PD set aside their myriad differences to create a strong and lasting government.

The two parties still need to draft a programme and pick a cabinet. One of the hurdles is the role of Luigi Di Maio, the M5S leader. The PD insisted he step down as deputy prime minister in return for them accepting Conte as prime minister.

The other potential threat is the plan by M5S to ask its members to vote on any agreement with the PD on Rousseau, the online network it often uses to make policy decisions. It is unclear how many subscribers the site has or how votes are counted, but many M5S activists oppose the alliance.

If they manage to form a government, the first challenges will be to draft Italy’s budget for 2020 and freeze a hike in VAT. The parties are poised to ask the EU for flexibility with the budget, the first draft of which must be ready by the end of September, in order to “reinforce social cohesion” in the country.

“We need to get to work immediately to come up with a budget that avoids an increase in VAT,” Conte said.

There were fierce clashes between Italy and the EU over this year’s budget and the country’s huge public debt. Conte, who has repeatedly said Italy would respect EU budgetary rules, has twice managed to avert threats of sanctions.

Italy was plunged into chaos this month after Matteo Salvini withdrew his League party from its fractious alliance with M5S, as he sought to exploit the party’s popularity to bring about snap elections and become prime minister.

The dramatic move threatened to create a fully far-right government. But Salvini, whose tactics have dented his popularity in recent weeks, had not banked on M5S teaming up with the PD. The pair are longstanding enemies but also the two largest parties in parliament.

Salvini had also not expected Conte to emerge as his rival. Talks between the PD and M5S progressed after Nicola Zingaretti, the PD leader, succumbed to demands from his M5S counterpart, Di Maio, to reinstate Conte.