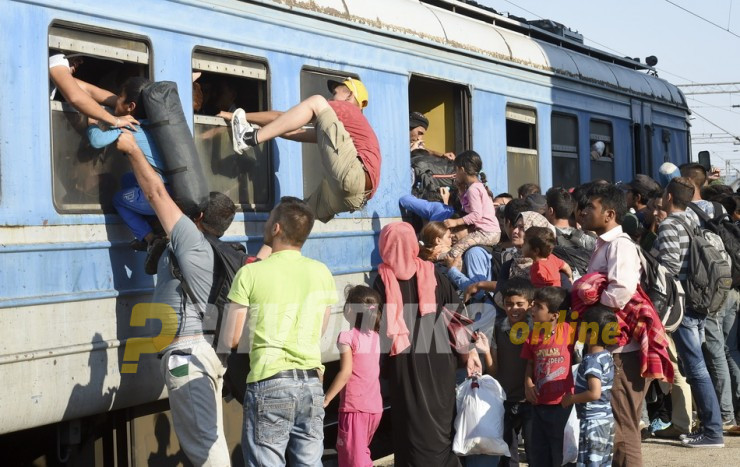 Migrants trying to board the train to Serbia / Gevgelija July 2015

The first two weeks of the year has given a lot of work to police officers and soldiers protecting the borders, and the migration pressure is high, the Hungarian Interior Ministry’s state secretary said at a press conference in Budapest on Monday, the V4 news agency reported.

Karoly Kontrat added that more than 17,200 migrants were prevented from entering Hungary last year. In the first twelve days of this year, 1,630 illegal migrants tried to cross the border. He said that Frontex, the EU’s border guard agency pointed out in recent days that the number of migrants on the Balkan route has doubled over the past year. At present, more than 100,000 migrants are on their way through the Balkans, and many of them are approaching Hungary’s borders. They often arrive in large groups and try to enter Hungary in various ways: on foot, by train or taxi, on water or through a tunnel, Karoly Kontrat said.

In the meantime, many experts warned that terrorists might arrive in Europe along with the migrants and it is still a real threat, the state secretary revealed. Karoly Kontrat emphasized that migration continued to be one of the most critical problems of the European Union. He added that the pressure applied by pro-migration forces is still palpable these days.

The state secretary said that the Hungarian government stood up for its view at EU meetings that the bloc’s external borders have to be strengthened. Furthermore, Hungary still does not support any initiative from Brussels, which would force member states to distribute and receive migrants, Karoly Kontrat stated.

He also revealed that the Hungarian government decided to strengthen border protection. Responding to a journalist’s question, he said that border protection authorities were prepared for all possible threats. All conditions are in place to ensure the safety of Hungary and its people, Karoly Kontrat emphasized.