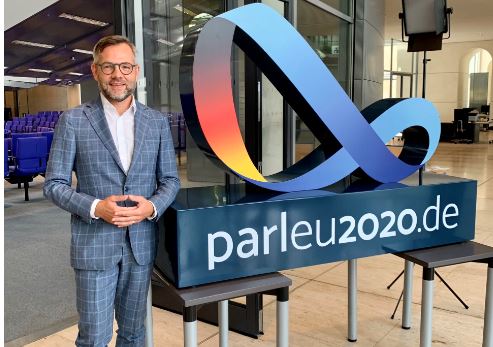 Michael Roth, minister for EU affairs of Germany, holding the rotating presidency of the European Union, played the anti-Semitic card against Hungary in an interview. Hungarian Foreign Minister Peter Szijjarto replied to the social democratic politician, assuring him that Jews are safe in Hungary. While anti-Semitic attacks are almost commonplace in Western Europe, Jews are supported in Central and Eastern Europe, the V4 news agency reported.

Michael Roth, minister for EU affairs of Germany, holding the rotating presidency of the European Union, was asked about Poland and Hungary in an interview. One of the main topics was the rule of law, but the social democratic politician made an interesting statement. “One aspect of the Article 7 proceedings against Hungary was the high level of anti-Semitism in the country. I cannot speak critically about anti-Semitism in other countries without mentioning the frightening increase in anti-Semitic crimes in Germany,” Roth said.

With this statement the German politician may have referred to Dutch extreme leftist Judith Sargentini’s report on Hungary, prior to the proceedings, that had repeatedly mentioned anti-Semitism in relation to the country. Hungarian Foreign Minister Peter Szijjarto responded to Roth’s statements on his Facebook page. The politician made it clear that the Jewish community in Hungary is safe.

Our Jewish compatriots do not have to be afraid. Their cultural festivals do not need to be guarded by armed soldiers, we have rebuilt synagogues and cemeteries with state funding, and we were proud hosts of the European Maccabi Games last year, Szijjarto declared.

The foreign minister called on the German politician to “stop making demeaning attacks on Hungary” and recommended that the minister of state “take a look around his own backyard” the next time he addressed “such a serious issue.” The minister said he had “engaged in many fierce debates” with Roth between 2012 and 2014 when they were both foreign ministry state secretaries.

Michael Roth took every opportunity to attack Hungary and Poland and does so to this day, Szijjarto added.

Szijjarto also announced on Sunday that Germany’s ambassador to Hungary had been summoned to the Hungarian Foreign Ministry for Monday.

Michael Roth would have been right to bring up Germany when he was talking about anti-Semitism. Back in May, German Interior Minister Horst Seehofer already reported that in 2019 authorities had recorded 2,032 crimes motivated by anti-Semitism, a rise of 13% over 2018. He also said that over 90% of those crimes were carried out by right extremists.

One of the most serious anti-Semitic attacks took place last October in Halle, East Germany, where a 27-year-old neo-Nazi man carried out an assassination. He livestreamed his armed attack against the Halle Synagogue with a camera mounted on his helmet, as well as the subsequent killing of a 40-year-old female passer-by on the street. He then drove to a Turkish restaurant where he killed a 20 year-old man, and fled the scene.

German Foreign Minister Heiko Maas said that last year, over 400 antisemitic incidents were recorded over a course of six months in Berlin alone. “Jews in Germany feel threatened to such an extent that almost half have thought about emigration,” the foreign minister wrote in the German weekly Der Spiegel. Felix Klein, the German government’s anti-Semitism commissioner warned Jews against donning the kippa in parts of the country following a rise in anti-Semitism.

While anti-Semitism is a serious concern in Germany, Jewish communities enjoy the support of the Hungarian state. During the Holocaust Memorial Year in 2014, the Hungarian government decided to support the rebuilding of synagogues and reintroduce the buildings as “places of religious and cultural life belonging to the local community.” Since then, more than 20 buildings have been renovated.

This June, Zoltan Kovacs, Hungarian Secretary of State for International Communication and Relations, stated in an article in the Israeli newspaper Haaretz: “the Orban governments have done more than any other Hungarian government to address antisemitism and support our Jewish community.”