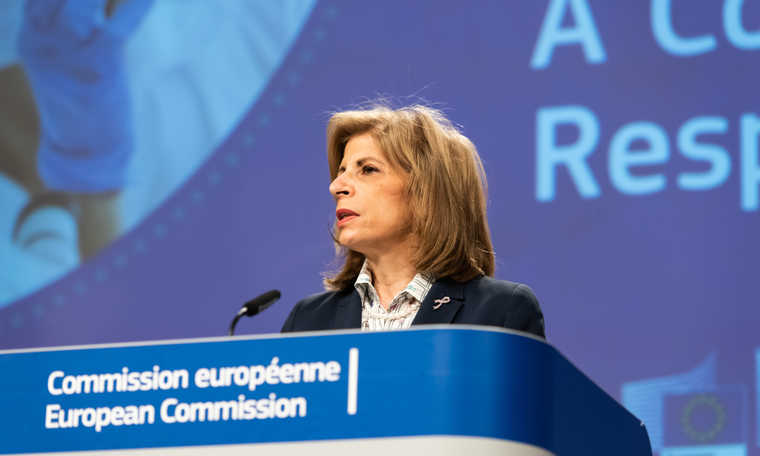 The V4 news agency reports on the issue of whether EU Commissioner Stella Kyriakides signed a contract with AstraZeneca on worse terms than the agreement signed by the UK on purpose or out of ignorance.

The UK has a better contract with AstraZeneca to provide vaccines than the European Union, British Health Minister Matt Hancock has said. Mr Hancock told the Financal Times that the EU has “a ‘best efforts’ contract and we have an exclusivity deal.” AstraZeneca CEO Pascal Soriot confirmed Mr Hancock’s statement. He said in an interview that the UK contract was signed three months before the European vaccine deal. Mr Soriot added that “everybody is getting kind of a bit, you know, aggravated or emotional about those things. But I understand because the Commission is managing the process for the whole of Europe.”

Back in January, EU Health Commissioner Stella Kyriakides argued that AstraZeneca’s first come, first served principle in Britain only applies at the butcher’s shop, and not to vaccine contracts. Kyriakides specifically stated that they reject this logic and said that pharmaceutical companies and vaccine developers had a moral, social and contractual responsibility, which they need to uphold.

There are two plausible explanations as to why the commissioner had entered into a bad contract, one is ignorance and the other is intent. It is up to everyone to decide for themselves. Another interesting detail is that Stella Kyriakides, of Cypriot descent, studied psychology in the UK and has excellent English language skills. She also owns a stake in her family’s law firm, and her family has been considered an influential dynasty of legal counsels in Cyprus for decades, with extensive international connections. Thus the fact that she had signed such an unfavourable contract is unlikely to be the result of her English language skills or legal competence. The question remains as to why the European Commission and AstraZeneca had entered into such an that contained no firm commitments.

In a bid to get to the bottom of this conundrum, V4NA has sent a few questions to the commissioner. We inquired whether she had deliberately signed contracts on worse terms than those concluded by the UK, and we also asked if the agreement without commitment was made out of ignorance.

V4NA has also approached Ursula von der Leyen, asking how long she intends to cover the health commissioner’s back. We asked whether she thought the Cypriot commissioner had signed an unfavourable contract out of ignorance or with intent. We also asked the EC chief about what she considered was the worse mistake: if the agreement – which contains unfavourable terms for EU citizens– was concluded deliberately, or out of sheer ignorance?