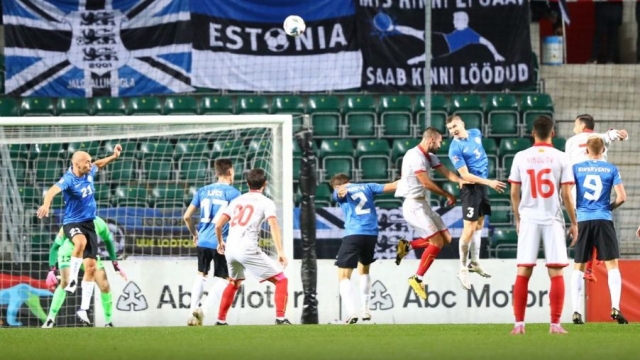 Macedonia drew with Estonia 3:3 at the UEFA Nations League game in Tallinn this afternoon. Our team badly underestimated the Estonians, especially after our win against Kosovo, and were on the verge of losing the game, forcing Goran Pandev to salvage a draw.

The Estonians had an early own goal in the 3rd minute and this added to the self-assuredness of the Macedonian team. This allowed Sappinen to even the score at the 33rd minute. The bill came due in the second half, when Sappinen again scored to bring Estonia ahead, and Liivak made it 3:1 through a penalty in the 76th minute, after Macedonia missed a penalty.

Coach Angelovski, who gave a chance to a number of players from the bench, was forced to call Pandev into the match who scored in the 80th minute, and Gjoko Zajkov evened the score with just two minutes to go making it a lucky escape for Macedonia.

Angelovski said that he is disappointed from the outcome. “I rest some of the key players and gave a chance to others. It’s up to me to offer them a place in the team, and up to them whether they will use the opportunity”, Angelovski said, adding that he will push the team to win first place in the group despite this setback.