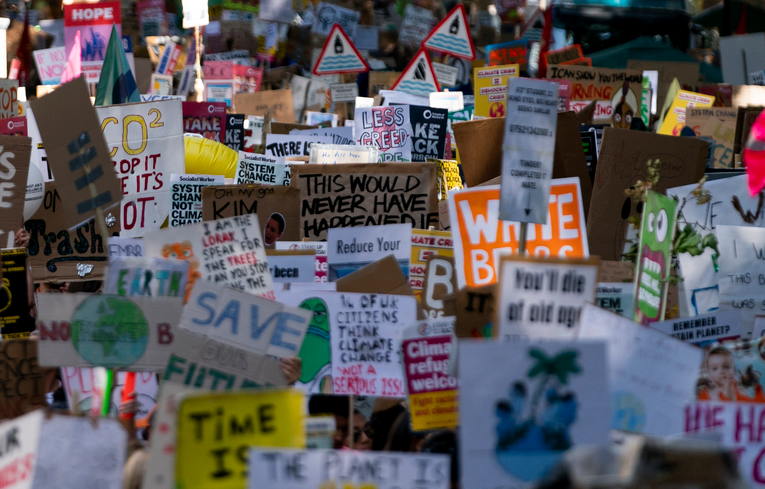 Children and teenagers are walking out of classrooms all over the world on Friday to participate in a massive global climate protest.

Protests kicked off early in the day in Asia and Australia, where tens of thousands of young people and adults joined the protests to demand no new coal or gas projects and 100 percent renewable energy by 2030.

“They say ‘stay in school,’ ‘get good marks,’ but what is the point of that if our future is being ruined,” said 16-year-old Freya Croft in Sydney’s beach suburb of Manly.

The Fridays for Future movement was started by Swedish activist Greta Thunberg, 16, who has galvanized young people around the world with her activism since she began organizing a weekly school strike and rally outside the Swedish parliament in August last year.

This week’s rallies are set to be the biggest global collective protest so far, with events scheduled to take place across the world’s inhabited continents.

Students and environmental activists in New Delhi gathered outside the Ministry of Housing and Urban Affairs to demand climate action in India, the planet’s third-largest emitter of greenhouse gases.

“We are here to reclaim our right to breathe, our right to live and our right to resist,” said Aman Sharma, a young activist participating in the Fridays for Future protest in the capital.

Several thousand Bangladeshi children marched on the streets of Dhaka on Friday, asking the government to announce a “climate emergency.”

“[A climate emergency] will help the people in other parts of the world to perceive the risks Bangladesh is facing because of the climate change,” read a memorandum that the protesting children submitted to Prime Minister Sheikh Hasina.

In Bangkok, some 200 protesters also marched through the city to submit an open letter calling on the Thai government to do more to mitigate climate change.

Protesters demanded that the government declare a climate emergency in Thailand and the Philippines as well.

As the day moved on, protests geared up across Europe, the birthplace of the Fridays for Future movement.

Protesters gathered near the Swedish parliament, where Thunberg began her climate strike a year ago, before marching to Citizens’ Square in the district of Sodermalm for the rally.

Thunberg is currently in New York for a UN Climate Action Summit.

In Germany, organizers said 80,000 people had turned up at midday at Berlin’s Brandenburg Gate, with police putting the figure at “much more than 10,000,” while Hamburg police said at least 45,000 protesters had turned out in the northern port city.

Five Dutch teenagers between the ages of 14 and 18 set off midday on a 120-kilometer trek from the eastern city of Wageningen to the western city of The Hague, where the country’s parliament is located.

They plan to protest there next week. “We want to shake people awake,” they said.

In Brussels, the capital of European politics, some 15,000 people marched as part of the climate strike, according to police.

“What do we want? Climate justice! When do we want it? Now!” chanted crowds of young people passing by the European Commission.

Tens of thousands of mostly young people joined scores of protests across Britain, as the leader of the opposition addressed the largest protest near parliament in central London.

The London protesters carried banners and placards bearing messages including “Mars is not an answer” and “Don’t be a fossil fool.”

In South Africa, several hundred people gathered near the Constitutional Court in Johannesburg to join those around the world calling for more action against climate change.

With the sweltering heat seeming to back their demands, a colorful crowd sang, chanted and held up homemade posters with slogans such as “Let us now pause for a moment of science.”

Similar peaceful protests were held in Kampala in Uganda and Nairobi in Kenya.

Activists were also participating in acts of protest further afield.

Civil society group 350.org posted photos of young people “arriving now via boat in Marovo in the Western Province of the Solomon Islands ready for their #climatestrike #MatagiMalohi event today.”

The Solomon Islands is made up of hundreds of tiny islets that are some of the worst affected by rising sea levels and unpredictable seasons.

Youngest coronavirus patient in the country is 2-year-old child

City and intercity transport in Kumanovo to be halted, all stores in open malls to be closed, except pharmacies and supermarkets

Coronavirus outbreak will be over after two incubation cycles without new cases, Filipce says

An employ at the US owned Gentherm car parts plant in Prilep tested positive for the coronavirus. This prompted a temporary cease of operations there and all employees were sent home. Workers told “Republika” that they are yet to be told if they will all be tested for the virus. They are...
Economy 02.04.20 | 15:03

Mickoski: Short-sightedness of government’s economic team, supplemented by Spasovski and Zoran Zaev, prevents from seeing the chance of using money from the pension fund

Map: Nearly all cities in Macedonia have confirmed coronavirus cases

Police fines 20 people in Prilep 2.000 EUR each for violating the curfew