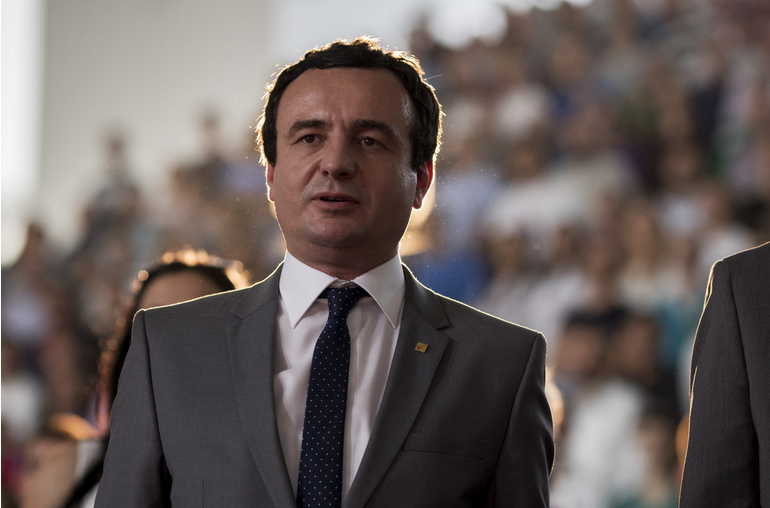 The leftist Vetevendosje (Self-determination) party, led by Albin Kurti, was narrowly leading the Democratic League of Kosovo (LDK) by a 25.6 to 24.9 per cent, with 98 per cent of the ballots counted.

Kurti, who is set to get the mandate to form the next government after the final result is declared, has already said that he would seek a coalition with the LDK.

The PDK came in third with 21.1 per cent and will move into opposition for the first time since 2007, while the coalition of outgoing Prime Minister Ramush Haradinaj’s Alliance for the Future of Kosovo won just 11.5 per cent.

“We will contact the LDK to bring about this change. When the opposition becomes the government, that is when the changes will come. Our victory just started the changes,” Kurti said.

He said the fact that two parties from the opposition will combine for “at least 60 seats” in the parliament of 120 lawmakers made him particularly happy.

Kurti, a student leader imprisoned by Serbia 20 years ago for his activism, was the loudest critic of corruption in the Kosovo government, but also UN and EU missions.

He and Vetevendosje, established in 2005, also strongly opposed EU-brokered negotiations with Serbia, saying Belgrade was being rewarded for the oppression and war in the mostly Albanian Kosovo.

Vetevendosje frequently protested in the street, often violently, and its lawmakers interrupted parliamentary sessions by releasing tear gas. Kurti himself had been arrested twice for this.

Now he faces the daunting task of building the first government in Kosovo to last a full term after more than a dozen years.

For that, the Vetevendosje and the LDK will have to put put aside their bickering from the past and probably include a third partner into the alliance.

Once in place, the next Kosovo government may expect pressure to resume the long-stalled normalization talks with Serbia, held under EU auspices since 2011.

A former Serbian province, Kosovo declared independence in 2008, a decade after the KLA began fighting Belgrade’s forces, eventually drawing NATO into decisive action against Serbia in 1999.

Though Kosovo is recognized by more than 100 countries, Serbia – backed by Russia, continues blocking it from the United Nations and other organizations.

Kurti has already signalled that he intends to maintain his hard line in relation to Serbia.

“The dialogue will not be about what Kosovo will give to Serbia in exchange for the recognition, but what Serbia owes to Kosovo,” he said.

But Belgrade has leverage in Kosovo itself – of the 120 legislative seats, 20 are reserved for ethnic minorities and half of that for the Serbs.

All 10 seats were won by the Serbian List, which is loyal to Belgrade. The restive, Serb-dominated northern part of Kosovo has resisted integration into Pristina’s institutions.

The head of Serbia’s Kosovo bureau, Marko Djuric, said that the Kosovo leaders “will have to knock on the door of the Serbian List if they want legitimate institutions.”