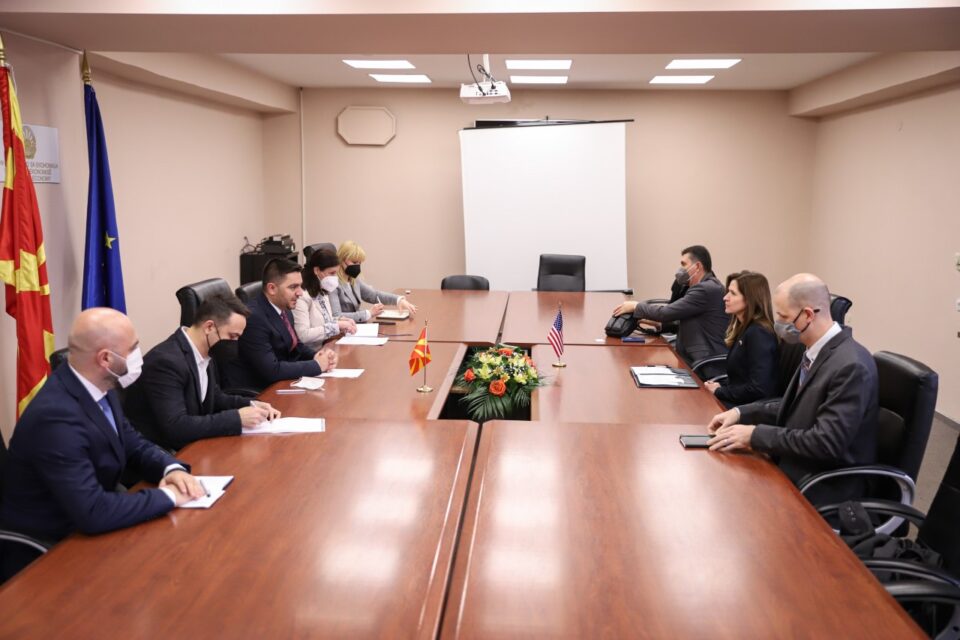 Minister of Economy Kreshnik Bekteshi met Friday with US Ambassador to Macedonia Kate Marie Byrnes to discuss cooperation between the two countries, the economic consequences that may arise as a result of the Russia-Ukraine conflict, as well as the implementation of infrastructural projects, especially energy projects.

According to the Ministry of Economy, during the meeting the Minister presented the implemented projects and planned activities in the field of energy, trade, innovation, support of foreign investors.

Bekteshi informed the ambassador about the set of 26 measures adopted by the Government to support the economy and stressed that the situation is being closely monitored, especially in the area of energy prices, for which scenarios for possible outcomes are being developed.

He also expressed his gratitude to the US Government as our main strategic partner, which continues to provide significant support to our Government in the implementation of activities aimed at economic growth and stability of the country, the ministry said.

At the meeting, Minister Bekteshi and Ambassador Byrnes also talked about the determination to continue the economic cooperation between the two countries with special emphasis on encouraging projects and investments that will enable permanent and sustainable energy independence of Macedonia.

Both interlocutors agreed that a key challenge for the Macedonian economy at the moment is dealing with the economic consequences of the Russian-Ukrainian conflict.

During the meeting gratitude was expressed for the support of Macedonia, which as a NATO ally, joined the call for an end to hostilities in Ukraine, the Ministry of Economy said in a statement.