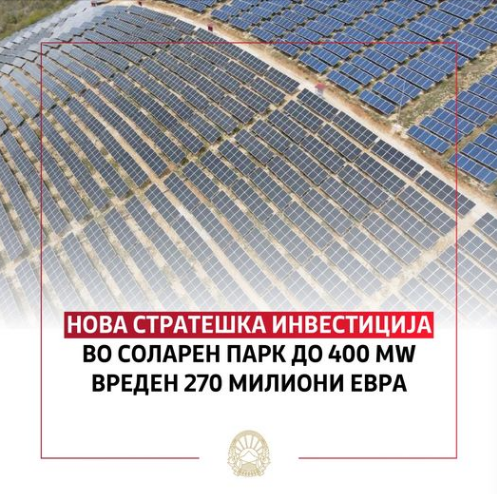 Zoran Zaev announced in a Facebook comment that the French Akuo Energy company will fund a large solar energy project near Stip.

According to Zaev, the Stipion project will supply 116,000 households with its installed 350-400 MW capacity. It should begin to get online in 2022.

This is the second large renewable energy investment Zaev announced, after the planned Virovi wind park near Kumanovo that should have similar installed capacity.

In the mean-time, Macedonia is in the midst of a deep energy crisis, with domestic production at bare minimum after years of mismanagement and gross corruption surrounding the main REK Bitola coal plant. Price hikes are guaranteed early next year, as the country imports most of its electricity in the run up to the peak heating season.