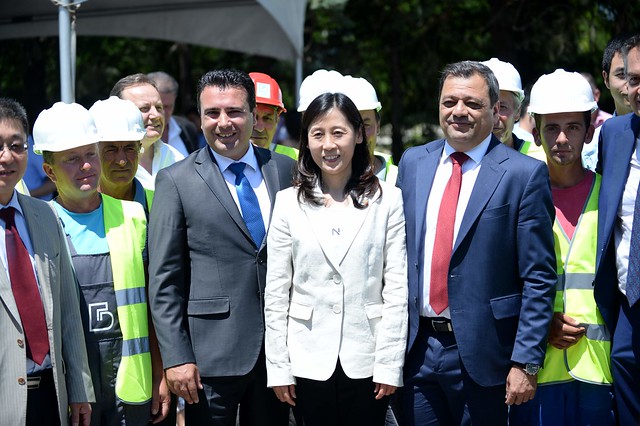 Is there any greater crime than the lies of Prime Minister Zoran Zaev, who for two and a half years has blocked the construction of the Kicevo-Ohrid highway on the grounds that the route was missed. The largest tourist center and the capital still can’t get connected by a highway.

The agreement with the Chinese Sinohydro construction company was twice annexed, the deadline was broken, and the amount increased by half. The Kicevo-Ohrid highway, which the SDSM said was overpaid, was projected by the previous government to be worth around 375m euros, and at the time of SDSM got more expensive by 187m euros.

Prime Minister Zoran Zaev and Minister of Transport and Communications Goran Sugareski accused that the route was missed, while the opposition VMRO-DPMNE, during whose rule the construction of the highway began, accused SDSM of not paving a single meter of the promised thousands of kilometers road.

Banditry on the highways cannot continue because the citizens must know that the whole route has been missed on the Ohrid – Kicevo road, the project and what is the real route. Citizens cannot be unaware that what constitutes unresolved property-legal relations due to the commission, in a hurry to realize it, causes huge damage to the Republic of Macedonia and the budget of the citizens of the Republic of Macedonia, said Zaev. 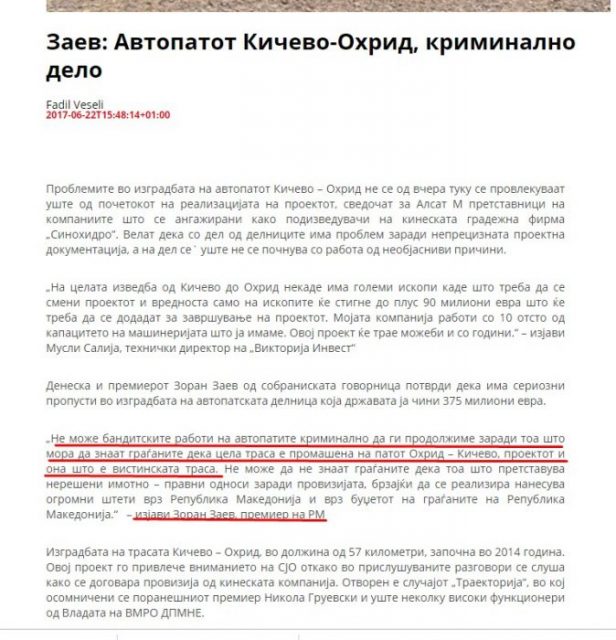 A few months ago, Deputy Prime Minister Koco Angjusev dropped the phrase “missed route” and spoke of a lack of funding.

The loan with Exim Bank expired on January 19 and virtually no funds were available to continue working. We applied in November, but we received the approval from Exim two days ago and now things will intensify on the Kicevo-Ohrid road, especially in the section from Vrbjani to Ohrid, Angjusev said.

In an interview in July this year, he said he expected a section of the 50km-long highway, some 30km long, to be released as soon as possible, not exceeding one year.

SDSM Commissioner for Transport and Communications Blagoj Bocvarski finally acknowledged on Monday that the route of the Kicevo-Ohrid highway was not missed, as previously claimed, but blamed the citizens for the terminology used.

On the other hand, as regards the Kicevo -Ohrid road, I agree that the route was not missed maybe it is a terminology used not by SDSM but by the citizens and the media, it may have been taken over by someone from SDSM, Bocvarski said.