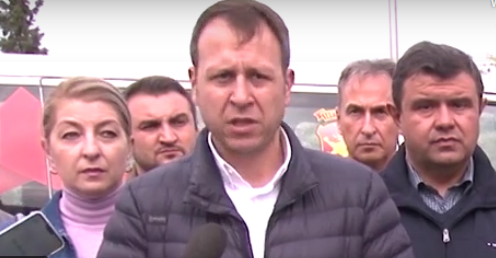 Talks on Renewal of Macedonia continue this weekend, after yesterday’s visit to Gradsko municipality, today we are in Veles, where we discuss the problems of the citizens, where a number of omissions are noted, both in the local and the central government. The citizens are primarily interested in presenting some of the things that SDSM led by Zaev somehow manipulated the citizens of Veles, so they asked to convey some of the things that were promised, but to this day they have not been fulfilled, Igor Janusev, VMRO-DPMNE’s secretary general said in Veles on Sunday.

Such project is the closed market, the roundabout around the city, perhaps the only thing they managed to accomplish was to close the pool, ie the indoor pool, because the pool was not working and de facto is closed. What we actually see at the state level, led by Zaev’s criminal racketeering gang, we see in the city of Veles as well, there are no theater events, sports and culture are virtually sinking. But the people of Veles have realized this, they know that the path that SDSM is leading is not right at all, but it is totally wrong path. That is why from here we will say that Macedonia is being renewed, and Zaev is failing in the next elections which will be held in a few months, we will definitely send him to the political history, said Janusev.