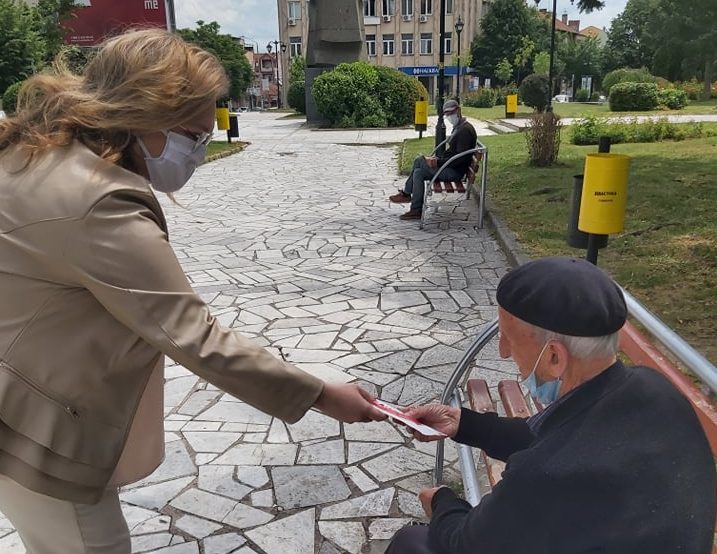 Deputy Interior Minister Slavjanka Petrovska announced that she is also entering quarantine, after being possibly exposed to the coronavirus, during her pre-election campaigning.

Petrovska was meeting with SDSM officials who are also going into quarantine after two of them, Muhamed Zekiri and Sanja Lukarevska, tested positive to the virus. The ruling party was conducting a full schedule of campaign meetings and ralies with voters across the country, despite the threat of the epidemic. Petrovska was among the SDSM officials who were meeting voters and distributing election materials in Kumanovo – one of the worst hit Macedonian cities – on Sunday. The party demands early elections as soon as possible, hoping that the concerned public will turn out in record low numbers, which they believe will be to their advantage.

Straight from the campaign trail: SDSM officials go into coronavirus quarantine after meeting with Muhamed Zekiri

Petrovska was previously extremely outspoken in the negative campaign SDSM was conducting against Interior Minister Nake Culev, the only opposition appointed head of a Government department. Faced with the spike in coronavirus numbers, which tarnished the image of a successful handling of the epidemic which the ruling party was portraying, SDSM deflected blame toward Culev accusing him of not fining the citizens enough. Petrovska particularly demanded that Culev assumes responsibility for not using the police to break up iftar dinners by Muslims citizens, held during the month of Ramadan, which are likely the reason for the latest spike.

The oppositions responds that it is now clear that it was SDSM top officials who ignored the recommendations, attended iftar dinners and conducted a pre-election campaign before it was safe to conduct massive gatherings. Some media outlets also warned that SDSM is hoping to campaign on any heavy-handed tactics employed by the police if they actually break up an iftar dinner, and would have accused Culev and the VMRO-DPMNE party of Islamophobia if this happened. As the dinners were largely held in private homes and yards, the police had not grounds to intervene and urged religious and political leaders with clout in the Albanian and other Muslim communities to get the citizens to uphold the recommendations – a strategy which, it is now clear, has failed.