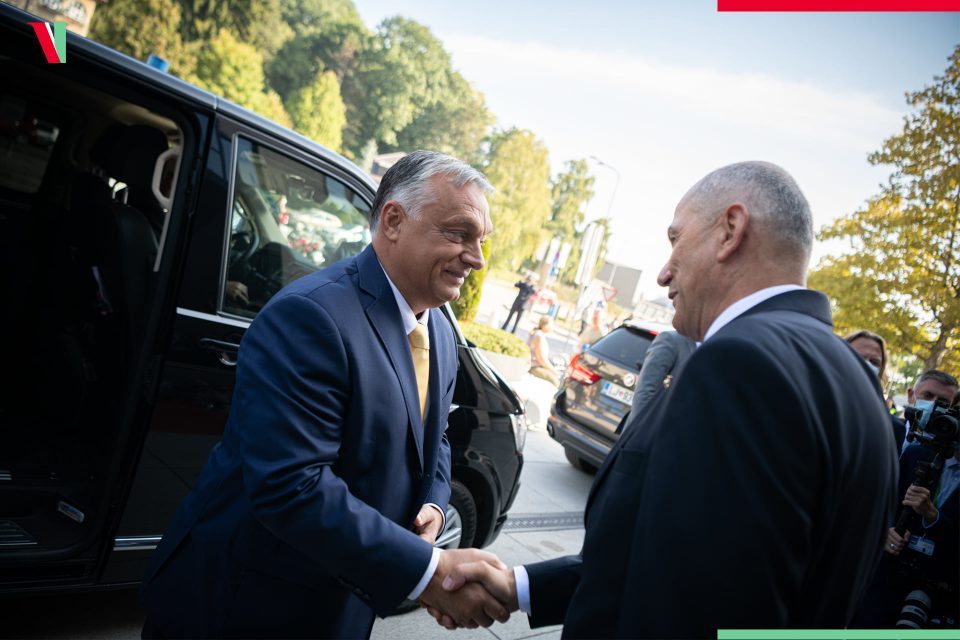 Countries in the Central European economic area, including Slovenia and Hungary, are emerging more rapidly from the crisis because they have persevered, not dismantled capacities, continued developments and kept people employed throughout last year, Hungarian Prime Minister Viktor Orban said in Celje, Slovenia, on Wednesday.

In his speech at the opening of the 53rd MOS International Trades and Business Fair, Hungary’s prime minister emphasized that the event couldn’t have been organised at a better time – on the eve of a new era, in which both Slovenia and Hungary stand to emerge as winners. Hungary is ready to continue the prosperous bilateral cooperation, he announced, and noted that Hungary is being represented at the fair by 26 companies exhibiting on 525 square meters. Mr Orban stressed that the two countries had established the most effective co-operation in their history.

Mr Orban explained that we were at the beginning of a new era in terms of the world economy, “the pandemic has turned our lives upside down, causing not only a health crisis, but also a serious economic crisis”. Last year was a “dark year” in terms of the world economy: 114 million people lost their jobs globally, investment fell by 42 per cent and the volume of world trade dropped by more than 5 per cent. Hundreds of factories were shut down, large and otherwise strong international companies were forced to cut capacities and many international companies had to drastically curtail their activities. In short, the power relations have fundamentally changed and are still transforming in all segments of the world economy.

The Hungarian PM believes that the new world economic era that began this year is kicking off with extremely fierce competition for the redistribution of production capacity the world over. Factories are not being re-established where they were shut down, and capacities are not automatically rebuilt where they were before, he pointed out.

Mr Orban emphasized that investors are looking for new and more promising locations, and Hungary has entered into this race. Countries and regions that have good odds in the running have persevered throughout the crisis, had a clear strategy, refrained from dismantling capacities, continued the developments last year, and preserved their workplaces, he said. The Central European economic area, including Slovenia and Hungary, is just such a place, he added.

Hungary’s premier also underscored that, from the Hungarian perspective, Slovenia has never belonged to the Western Balkans. Instead, it was always considered part of the large Central European economic area “stretching from the Polish coast to the Adriatic – a cultural sphere, an economic area, a large Central-European economic area, which provides the real hinterland and security of the countries within it”. Therefore, “we have always seen Slovenia as a Central European country similar to our own” and through joining forces and working together, both countries will be among the winners of the new world economic era along with the other Central European countries, Mr Orban said.

He went on to say that Slovenia’s economic figures for the first half of the year are a clear proof of this. Prime Minister Janez Jansa and his government have created the conditions for Slovenia to “return to its previous level of economic performance at a remarkable rate”, he stressed.

Mr Orban mentioned that in the past years, the cooperation between the two countries reached a new dimension. Since Janez Jansa became Slovenia’s prime minister, “Slovenian-Hungarian relations have returned to the basis of mutual respect, and this is beneficial for both nations,” Hungary’s prime minister said.

Mr Orban believes that this year could see a new record in the volume of bilateral trade and the two countries will reach their highest trade volume ever. From mid-year 2022, the two countries’ electric power networks will be connected, a joint fund will be set up for the development of border regions, and an international test corridor will be built for self-driving vehicles. Hungary is ready for connecting the existing gaspipe networks, and the biggest Hungarian companies are already present in Slovenia’s economy, bank system, and fuel supply network, he noted.

PM Orban underlined that the Hungarian-Slovenian trade balance is positive for Slovenia, meaning that Slovenia is winning in bilateral trade. However, its growing volumes are also beneficial for Hungary, so the country has a vested interest to increase trade volume further, even despite this imbalance, he said, adding that 46 Slovenian companies are already active in Hungary, and that they expect and welcome many more.

After missing out on the past year and a half, Slovenia, as a partner, can cooperate in an exhibition with a strong country like Hungary, which means the two countries have managed to survive the coronavirus crisis, Slovenian PM Janez Jansa said at the opening ceremony of the fair, where Hungary acts as a partner country this year.