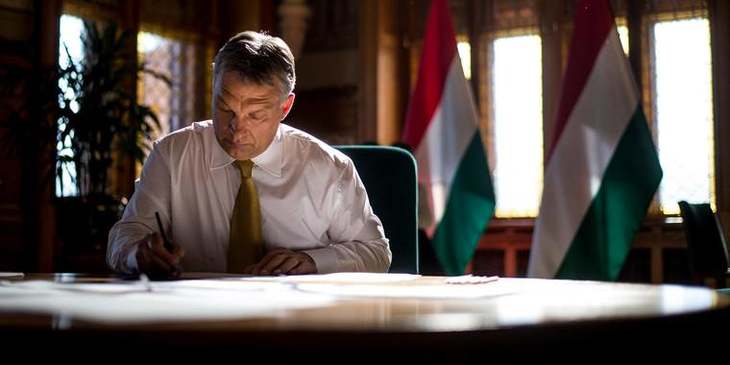 In the letter sent to Ursula von der Leyen, which was placed at the disposal of Hungary’s state news agency (MTI) on Monday by Bertalan Havasi, Hungarian PM Orban’s press chief, Orban underlined that “the situation that is developing along the eastern border of the European Union, and the ongoing disputes between the Commission and Hungary have left several key issues unanswered”, the V4 news agency reported.

“Global challenges demand an increase in our capacity to withstand crises, and it was in this spirit that last July Hungary decided not to be a hindrance to the financial recovery of the Covid-ravaged European Union,” he explained.

“We must acknowledge that the current emergency situation must also be addressed through special measures. Our security and territorial integrity are at stake,” PM Orban emphasized. Consequently, the current legal framework needs to be adjusted to reality in this situation, and “member states cannot be held accountable, or penalised, for applying operational – and at the same time proportionate – solutions to challenges facing all of us,” he pointed out.

“In its conclusions of 21-22 October 2021, the European Council unanimously decided that urgent measures must be introduced against recent migration pressure, and asked the Commission to put forward a proposal for the required changes to the legal framework of the European Union, and also with relation to concrete measures based on suitable funding to assure immediate and suitable response measures,” he recalled. “The justification for this was that the current legal framework does not mirror reality, is outdated and inoperable,” Orban added.

According to PM Orban, “we can perhaps all agree that the current legal framework does not provide suitable instruments that member states under pressure can apply in an emergency. Highlighting only the weakest link in the current system: the right to enter the territory of a member state must be afforded to everyone, without the opportunity to extensively examine the applicant’s background at the border prior to allowing them entry to the county,” he pointed out.

“As soon as an applicant is on the EU’s territory, they leave and travel to the country they want to before the asylum procedure is completed, and accordingly it is impossible to eliminate the risk of secondary movement, which in turn encourages other member states to maintain internal border protection that is at odds with the Schengen Borders Code”, he noted.

“Special conditions require special measures. This was also the situation with relation to the Covid crisis, when the decision was made to ease the regulations relating to state funding and activate the general exception clause, thereby enabling member states to deviate from the usual budgetary requirements”, PM Orban stressed.

“When the European Commission decided to launch an infringement procedure with relation to the solution chosen by Hungary with a view to handling the migration crisis, migration pressure was primarily affecting Europe’s southern borders: from the east, along the Western Balkan migration route, and from the south via the Mediterranean”, he recalled. “Hungary has steadfastly defended the security of Europe and its citizens through erecting a physical barrier, and has done everything possible in the interests of differentiating between those who require international protection and those who are only in search of the economic advantages of European life”, he stated.

“Nonetheless, the European Union’s legal framework has consistently failed to handle the situation that’s emerged, as too have those proposals that we have seen over the past six years, and which have never had the full support of member states”, Orban wrote.

“Now, we must face new realities. Economies are struggling with difficulties, and migration pressure is growing not just in the south, but also along the EU’s eastern borders”, he highlighted. “We must recognise that the gravity of the current crisis is posing greater challenges for us than even the disputes concerning economic recovery”, PM Orban wrote to the President of the European Commission.

Accordingly, “in view of the serious crisis that must be urgently resolved”, Orban asked the Commission to put forward a proposal for the restructuring of the legal framework in line with changed realities, to immediately eliminate the forced implementation of current regulations that are out of date and are impeding a solution, and to suspend all infringement proceedings that are undermining the territorial and national integrity of member states, as well as measures aimed at protecting their citizens.