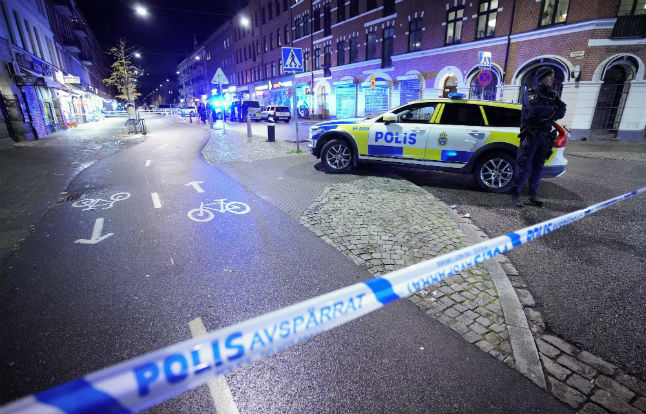 A 15 year old boy was killed in a pizza place shoot out in the Swedish city of Malmo.  Another young man was badly injured in the attack that was carried out on Saturday evening. The attackers fled on bicycles after killing the boy. Within minutes, in a different part of the city, a bomb planted underneath a car went off, destroying it and damaging a few other vehicles.

Ulf Kirstersson from the opposition Moderate Party, called on the leftist Government curb crime after a major rise in attack over the past years. The V4 news agency has counted 30 bomb attacks in the past two months serious enough to deploy the police bomb squad, while some 100 incidents were reported throughout the year.

Swedish police arrested three people over the weekend following an explosion in an apartment block in the southern city of Malmo. No one was injured, but the blast caused substantial material damage. There were two other bombings that same weekend over the course of 24 hours: one in Vaxjo, and another near Gothenburg, the V4 agency reported.

National Police Commissioner Anders Thornberg says authorities are introducing new measures to curb violence by criminal gangs. Thornberg believes the country needs more police officers and legislative changes, to increase the authorities’ remit. Swedes, however, are not only struggling with blasts, as recent figures seem to indicate that the number of anti-Semitic attacks are on the rise in the country.

A recent report published by the Swedish National Council for Crime Prevention, listed 280 anti-Semitic hate crimes in Sweden in 2018, compared to only 182 in 2016. They note that the latest numbers are the highest on record since at least 2006,when the Council began collecting aggregated data. Overall, the number of hate crimes with a racist or xenophobic motive rose by 69% over 2016 in Sweden to 4,865 cases last year. However, it is interesting that the Council did not publish any data on hate crimes from 2017, nor did it justify its decision to do so.