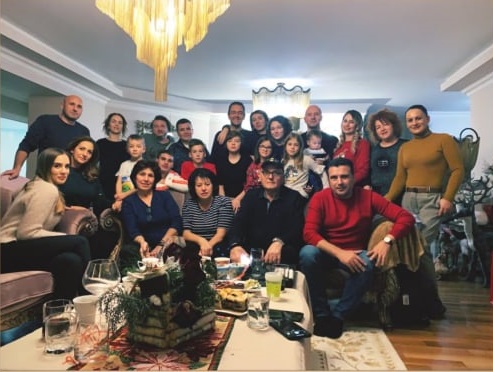 Vice Zaev, the brother of Prime Minister Zoran Zaev, came out of the ownership of the company Sara Engineering DOO Strumica, which has a suspicious and disputed debt in Eurostandard Bank of about 600 thousand euros and has not paid a single installment 620 days before the closure of the bank last year. According to publicly available data from the Central Registry, Vice Zaev left the company Sara Engineering DOO Strumica on February 18 this year. Zoran Markovski took his place as co-owner of the company, while the other two final co-owners, Sasko Brndevski and Risto Krecev, remained in the company.

Vice Zaev has been the co-owner of this company since 2010, and distanced himself from it with an unpaid debt to Eurostandard Bank just a few months after the bank closed last year. The money taken have not been returned.

In parallel, the company for production, trade and services Ferocem Plus DOO Strumica was founded in June 2017 by Trajce Zaev and Janko Janev. This company has a debt of about 360 thousand euros to Eurostandard Bank and has not paid anything 348 days before the closure of the bank last year. The only collateral for the loan is a simple bill of exchange. And after the bank closed in August last year, immediately after that, after two months, this company was renamed to Abira Plus DOOEL, with headquarters moved from Strumica to Kumanovo. It also got a new owner and manager, Rodna Dimova, a Dutch citizen living in the Netherlands.

The balance sheets of this company show that last year it had no activities, neither income nor expenses. The company has one employee. This company also has debts from unpaid taxes to the state, ie to the Public Revenue Office in the amount of about 1,650,000 euros.

How did Trajce Zaev, the cousin of the Prime Minister Zoran Zaev, alienate the company that had taken a loan on the basis of a bill of exchange and is now over-indebted so that nothing can be charged? Was it planned to hide the debt and the trace of the money by renaming the company and changing the ownership?

Is all this above the reason for the silence of the Government and all relevant state institutions for the robbery of deposits from Eurostandard Bank!? We have been facing a coordinated silence for more than 14 months. Everyone is silent. The Government, the Financial Police, the Basic Public Prosecutor’s Office for Prosecution of Organized Crime and Corruption, the National Bank are silent. The personal funds of 780 families were robbed and 2,000 legal entities behind which several thousand families exist or are in a severely difficult situation.

Do we not strive to have a society for all, to have justice and fairness? What are the commitments when for organized crime worth 60 million euros, for evidence available to the investigating authorities, for tolerance and silence for organized crime by the governor and the National Bank, for the owners and management of Eurostandard Bank who shared our money with the owners of 149 companies, there is no responsibility for more than a year !? As if we do not exist, as if we are not important, as if we are not part of that society. Lied and robbed, left to manage as we know and can.

Prime Minister, we apologize for disturbing you like this before the elections. We thought you would respond to our appeals to you, but we did not receive a response. Organized crime has a name and a surname, and we continue our fight for justice and fairness, say the damaged depositors in Eurostandard Bank.

P.S. Attached is an excerpt from the Central Register for the above mentioned companies, as well as 2 pictures where the most important activities are explained chronologically. 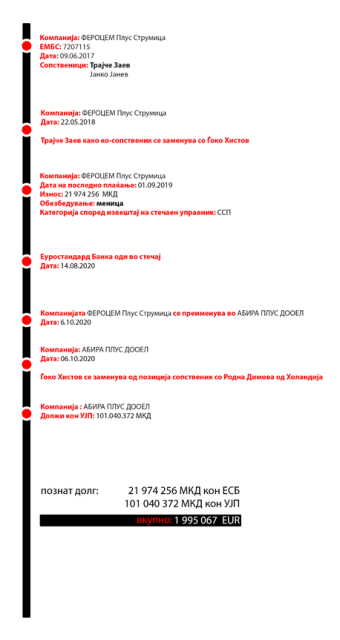 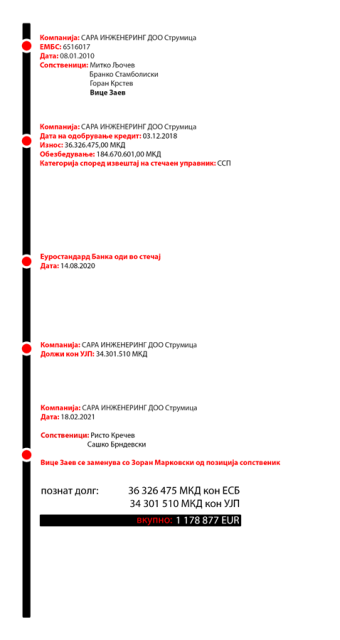 Amid the “Mafia” affair, the Zaev family play saints and donate ambulances