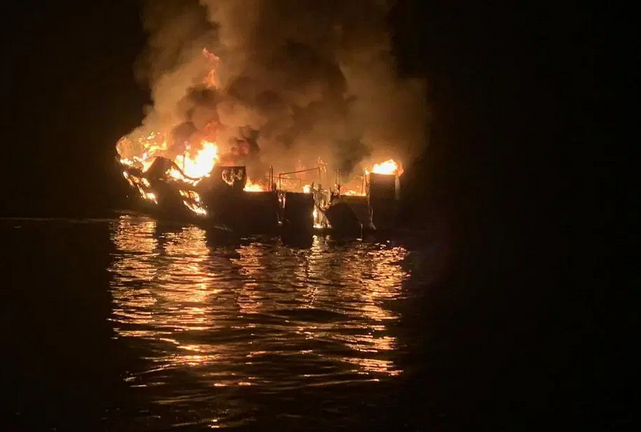 At 3:15 a.m., the U.S. Coast Guard and Ventura County Fire Department crews rushed to a mayday call that the “Conception,” a 75-foot-long charter dive boat carrying 39 people was ablaze 20 yards off Platts Harbor on the north side of Santa Cruz Island, which is located about 30 miles west of the city of Ventura.

Coast guard officials said in a press conference Monday the 39 onboard included six crew members and 33 passengers. Officials confirmed Monday evening 25 bodies had been found, five crew members survived and nine people remained unaccounted for. Twenty bodies had been recovered from the water at the time of this report.

The rescue operation was expected to continue into Tuesday morning.

Give crew members aboard were rescued by a passing good Samaritan boat called the “Grape Escape.” The crew members jumped off the burning boat, Coast Guard Capt. Monica Rochester told reporters at a news briefing from Channel Islands Harbor.