A member of a group, banned and declared a terrorist organisation by some countries, has criticised Sweden’s recent Quran-burning incidents. He argued that the establishment of a caliphate was the only way to preserve Islam, V4NA writes.

In Sweden, supporters of the Danish anti-Islam Hard Line (Stram Kurs) party appear to participate in a growing number of Quran-burning incidents to demonstrate that they have had enough of their country’s Islamisation.The burnings sometimes lead to riots and Muslims now demand a change to the constitution to make Quran-burning illegal.

A member of an organisation called Hizb ut-Tahrir has also weighed in on the issue in a video posted on Youtube. In the recording, Yosaf calls it unacceptable for anyone to ridicule the Quran and Islam, adding that they – the Muslims – must speak out against it. Yosaf says Islam is the only alternative, adding that Sweden’s populous Muslim community is no longer a minority, according to the Swedish Samhallsnytt portal.

He says Muslims must preserve their religion and should not let others attack it. Yosaf concludes the video by stressing that the only way to preserve Islam is to establish a caliphate, as it would protect Muslims who protect the Quran. He added that Islam would not only triumph, but also spread and be preserved by the people.

Hizb ut-Tahrir is a political organisation whose goal is to re-establish the caliphate, where Muslims can live according to Islam, in one big Islamic society governed by sharia law. Germany, China and some Arab countries have banned Hizb ut-Tahrir, Russia declared it a terrorist organisation.

After the publication of the news, the organisation sent a message to V4NA’s Twitter account, suggesting their unease at the fact that this particular news story was covered by an international news agency. 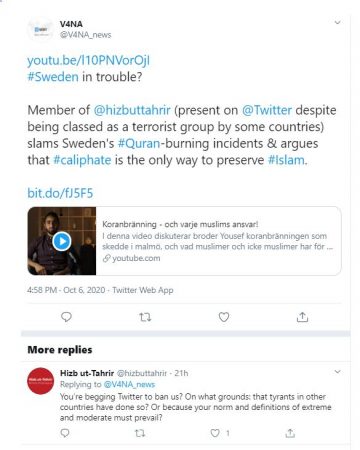