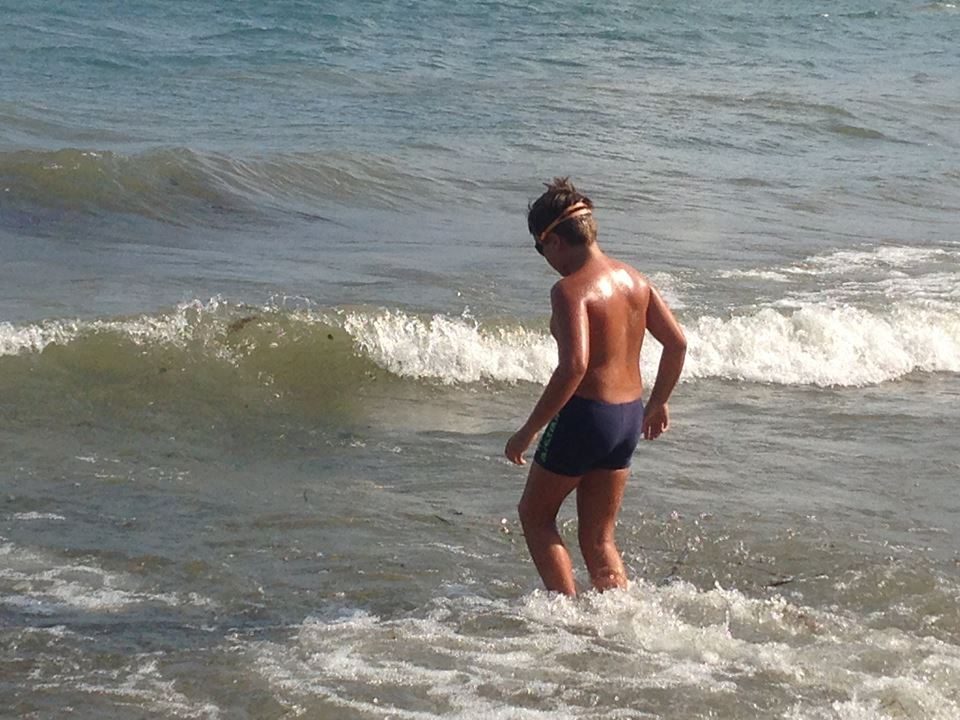 The Person of the Year 2018, the 13-year old hero Marko Pejchinovski from Ohrid is set to start an ultramarathon on Tuesday, in which he would once again attempt at swimming 64 km in Lake Ohrid in support of people with rare diseases. In support of today’s feat, but also a reminder of a child greatness, we are republishing our conversation with Marko from last September.

“Please, don’t say, ‘bravo for the child Marko who swam across the lake’ … he is not a child. He a big man,” popular Macedonian actor Rubens Muratovski wrote on his Facebook profile after the 12-yearold Marko Pejcinoski swam across the Ohrid Lake on August 28, a 25 km route. Yes, Marco is a child, in his soul, in his heart. But behind that childish smile, behind that innocent childish look, a man is hiding.
Persistence, desire, determination, courage that is lacking in many adults is hiding.

Marko is not just the boy who swam across the Ohrid Lake. Marko is the person who gave impetus to thousands of children who are facing problems. Marko is comfort, hope for tens of thousands of parents
fighting for their children, for parents who sometimes get stuck in their thoughts, in their fear – whether everything will be fine with their children … Marko showed them that hope is the last thing that should be lost…

That’s how we started the conversation with Marko. We met him at the Gradiste camp, where he was with his parents and family friends. He met us with a smile on his face, although he did not hide that interviews and talks with journalists are tough for him. That’s why our meeting was more conversation than an interview.

Marko’s modest parents did not want to talk too much – they say this is his success, not ours … But Marko is honest – without the support of mom and dad, he would not be a hero. Marko’s feat was not a child’s feat, it was not a feat of a 12-year-old boy. It was a man’s feat. I asked him if he was aware that it was an incentive and comfort for many children and parents who are experiencing problems like his or bigger.

“Yes, I’m aware. I think I helped them with the very messages I sent. Even if I hadn’t succeeded to swim across the Lake, the message was sent. In the talks I had I pointed out – you should never give up! It’s hard, it takes a lot of work, but success comes. Sooner or later you will accomplish your goal! said Marko, adding that he also faced the fear that his life would never be the same as before:

“When my health problems began, I thought it would never be the same as before. I was scared. But with the support of my parents and my will, I overcame that fear.”

Marko was a kid who played with the ball from morning till night. But after his health problems began, it was inevitable to find a way to channel his energy, primarily because of his youth, the years he has, and then because he started to gain weight due to inactivity.

Why did you decide to swim across the lake ?! Marko did not hesitate in the answer:

I wanted to prove to everyone, but first of all, to prove to myself that I can do it. I believed in myself. I started swimming last year after I stopped playing football because of my health problems. On the advice of the doctor and conversation with my father, I started swimming. The first month I swam in Hotel Tino. Then I waited for summer to come. Somehow it became interesting to me. We initially went swimming after my father came home from work for an hour, hour and a half. Slowly a greater desire appeared. I started practicing for the little marathon. Then I got a desire for more.

Today he does not take tragically the handicap, ie bone infarction, which he suffered sometime in October 2016, and for which he left football. He misses both football and the ball, but he has turned to something else that really fills him and makes him happy. His desire was to swim in the big marathon, but he gave up because he was aware that he did not have the speed of the other swimmers in the marathon.

“The marathon is racing. After the first one ends, the race finishes maximum in one hour. I’m not that fast,” said Marko.

To my comment that his time is not so bad given that some swimmers finished the marathon in almost eight hours a modest smile appeared on his face.

He actively started to train for swimming across the lake on October 15. He swam 296 km in the swimming pool at Hotel Tino by June 15. Including swimming in the lake and in the outdoor swimming pool, the young hero swam 450 km for eight months. He worked hard, with desire and enthusiasm. And as he himself said – the goal was accomplished with a lot of work.

The positive reactions of people who stop him on the street and congratulate him please him. He has seen most of the comments on social networks. I asked him which impressed him the most?

Actor Strezo’s comment – When I was 12 I was jumping from a bridge, and this boy swam across the lake.

All the congratulations are dear to him, every word means to him. However, when I insisted on singling out some of them, he singled out the congratulations from the famous marathon swimmer Diki Bojadzi and President Gjorge Ivanov. The memory of these encounters is somehow dearest. It was inevitable to ask him about the shirt that he was wearing at the meeting with Ivanov with the inscription “To the goal with the strongest one”. He said it was a surprise from his mom, dad, and brother on the day of the swimming.

Marko’s health is better. There is less pain now, the critical stage of the condition that affects the bone is over, time will show how it will react further. He will now start with an extra shoe pad to level the height.

When Mary, the Mother of God sees me swimming she will calm the lake

About the day when Marko swam across the Lake, I also talked to Pejcinoski’s friend who accidentally got into our conversation. He did not hide the happiness and excitement of Marko’s success:

“Marko has so much courage, he has no fear. We have been taking boat rides on the lake. There is no its’s deep down here, I can’t. The depth of the lake is not a problem. He swam the lake on a greater depth than the marathon swimmers, who swim closer to the coast. Marko does not think about where he is, he has no fear and phobia. I know marathoners who are afraid of the grass in the lake. It does not exist with him. There were big waves that day, and this guy (pointing towards Marko) said I’m going. We stood all, thinking about whether he should swim. There was a strong wind blowing, we were in tracksuit. The pressure we put on him that the weather conditions were not good did not affect him. The doctor asked him whether he will swim – without thinking twice he said “I’m going to swim”. We were all stunned. Especially his mother. And we said to her, do not worry, he will give up. He was in our thoughts the whole time … Marko from home won the first challenge. He told his mother: “when I will get in the water I will calm down the disturbed lake.” Knowing how crazy he was in a positive sense, I knew that there was no water barrier for him.

Marko’s mother had been trying to change his mind from the very morning, thinking that the weather conditions were not suitable for such a feat. But Marko’s comment was:

“When Mary, the Mother of God sees me swimming she will calm the lake…”

He said: “The lake will see what will befall on it”

And it did. He said: I was determined, there was no dilemma. At the beginning when I started, I considered for a while. Then I had no dilemma.

But the parents did have a dilemma. Doctor Goran Balev, who was present all the time while Marko swam, considered it for a while. But the doctor also gave the young swimmer courage to go.

“Doctor Balev is a legend of the Ohrid region. It gives maximum support to everything involved in sports activities in Ohrid. It was my personal desire to be there that day. We managed to convince him that Marko could do it and we asked him to be there. Until one week before the swimming he did not know that he would swim. Balev told us that swimming was the best for him and had
a share in the decision Marko to start swimming,” said Marko’s father.

After Marko swam across the Lake, when he arrived at the goal, the doctor made the necessary check ups to see the condition of his body. Dr. Balev’s comment was: All health parameters are great. There is
no parameter showing exhaustion. The child is in a top shape, as if he did not swim.
Jokingly I asked Marko whether he would go in the water if somebody said to him “Let’s go back”. Without hesitation ha said: YES.

Marko gave a good example that children like him should not be left unnoticed. The state should think about such talented children and the conditions they have for training and progress. Marco is the Person of the Year 2018 – there’s no dilemma for me! It’s hard that someone will overcome his sporting feat, and also the message he sent. Marco has his plans. He has a desire for La Manche, but there is time … We have no right to expect anything from Marko. We have the right to wish him only happiness and to give everyone support in their domain and in their possibilities. And Marko!? Marko is the hero! Whatever he decides, whatever he does, he is our hero!

When the mayor became prime minister, he brought a bus with people from Strumica to Skopje with him

I was in Sveti Nikole. The government promised life, but the Economist says that with Zaev we have a hybrid regime. In the 21st century, there is a hybrid regime in Europe, and they promised change, better life. Their rule has turned into a hybrid regime in which they are turning the country around....
Macedonia 22.01.20 | 17:16

No snowfall, but City of Skopje pays 263,000 euros for snow cleaning