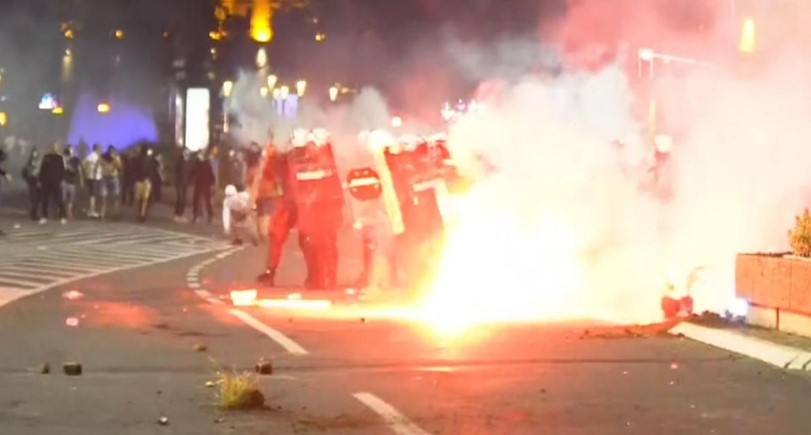 Serbian President Aleksandar Vucic’s announcement of a weekend curfew because of the deteriorating epidemiological situation in the country sparked a protest in Belgrade on Tuesday night, with a group of demonstrators breaking into parliament.

Around 1,000 people gathered in front of the legislature after Vucic said that the curfew and other restrictions are returning.

They blocked traffic, but there were no incidents until a group pushed past a police cordon and entered the parliament building. Police regrouped and pushed them back out a little later.

Dozens in the crowd have been streaming the protest to social networks. Many of the protesters were crowded together without masks.

A few hours before, Vucic appeared on national television and presented a dramatic take on the epidemiological situation, especially in the capital.

He said that a curfew will be imposed for the first time since early May.

“All Belgrade hospitals are nearly full,” he said in a televised address to the nation. “Particularly Belgrade is critical, the numbers in Belgrade are very bad.”

“We are opting for a long weekend curfew, from Friday through Monday,” he said, adding that gatherings of more than five people would be banned from Wednesday, both in enclosed areas and outside.

Earlier on Tuesday, Serbia reported 13 deaths since the day before, the highest daily toll since the pandemic began. It also reported 299 new coronavirus cases and has over the past week registered between 250 and 350 new cases every day.

The rising caseload comes around eight weeks after Serbia began lifting anti-virus restrictions, which were among the harshest in Europe. At the time, the number of daily new infections had dropped into the low double-digits.

Football and tennis matches with thousands of spectators have resumed and on June 21, Serbia held elections that had been postponed from April because of the outbreak.

In light of the rising caseload, authorities are now re-opening provisional hospitals and re-designating regular hospitals for Covid-19 patients. Since the weekend, masks have been mandatory in enclosed public areas.

On Tuesday, Serbia had just under 3,000 registered active cases and 110 patients in critical condition. The total death toll was 330.

The deteriorating epidemiological situation has spurred most countries in the region including Serbia’s beloved holiday destination, Greece, to ban Serbians from entering.

Tourism workers warn that 5,000 people would lose their jobs if the state didn’t act immediately