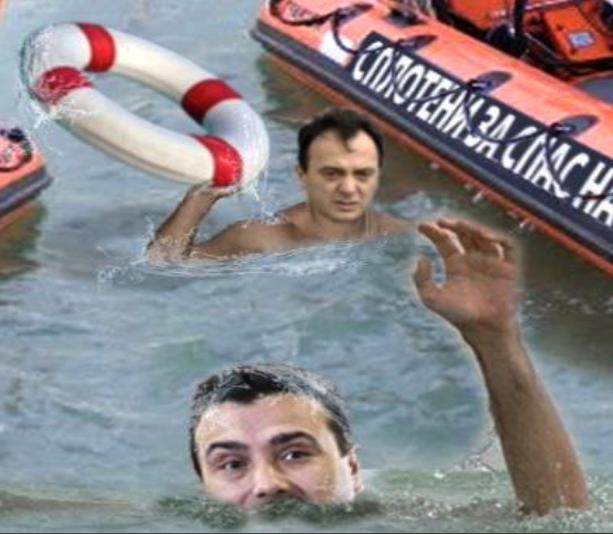 Prime Minister Zoran Zaev endorsed an attempt by a faction led by former security chief Saso Mijalkov to try and cause divisions in the opposition VMRO-DPMNE. This move reinforced the impression that has a de-facto coalition deal with Mijalkov, who he vilified during the 2015 Colored Revolution and accused of all sorts of crimes and corruption.

Mijalkov was expelled from VMRO-DPMNE after he helped Zaev get to the 81 votes he needed in the Parliament to impose the name “North Macedonia” on the country. Nine members of Parliament elected on the VMRO ticket voted for the imposed name – some of them openly threatened by Zaev with prison time if they don’t, and others apparently in coordination with Mijalkov. Since then, this group has understandably enjoyed little popular support and did not even try to compete in the 2020 elections, but from time to time tries to attack VMRO-DPMNE leader Hristijan Mickoski – sometimes bizarrely even coming from the populist right on the name issue.

During the summer, joined by several former VMRO mayors who were accused by Zaev in the past of corruption in the distribution of building permits, the group held several press conferences in front of the main VMRO office calling on Mickoski to resign, but then quieted down. Until yesterday, when it announced that it has collected enough votes in the VMRO-DPMNE Central Committee to convene a party congress in late March in order to remove Mickoski. The group, known as the Marriott group, for the hotel that is Mijalkov’s base of operations, did not give the names of the delegates who support their push, and by evening, the actual VMRO-DPMNE Central Committee met and announced that the congress will be held as planned before, in November, after the municipal elections.

But Zaev tipped his hand, and in a press statement announced that the opposition party is going ahead with the election of a new leader. With this, he openly endorsed the actions of Mijalkov’s group.

Infomax journalist Aleksandar Mitovski reports that Mijalkov and Zaev recently met and discuss the glaring issue with Zaev’s “fight against crime and corruption” – that Mijalkov is not in prison even after half a dozen criminal cases were launched against him during and after the Colored Revolution. In one of them, where Mijalkov was accused of warrantless wiretapping, he even reached the statute of limitations, which was a further major embarrassment for the Zaev regime, but also indicative of a deal between the two. According to Mitovski, their idea is to have Mijalkov sentenced to several years in prison in the first instance, but then drag the sentence on appeal, and eventually shoot it down. This would present an image of a country that actively fights crime and corruption, and dispel the impression of a working arrangement between Zaev and Mijalkov, while at the same time protect Mijalkov, who, in return, would continue to help Zaev by trying to create factions in the main opposition party.

A recent audio leak showed Zaev in talks with Aleksandar Verusevski, the son of notorious secret police chief Zoran Verusevski who was behind the mass wiretapping, and the two discuss a peace offer from Mijalkov, delivered by Verusevski.

The recording was made in mid 2016, ahead of the hotly contested elections and, more importantly, the 2017 incident in the Parliament, which Zaev used to blackmail VMRO-DPMNE representatives and to win further international support for his power-grab. Over a dozen protesters and police officials are serving lengthy prison sentences over the incident, which is seen in a much different light now that the coalition between Zaev and Mijalkov is in public view.